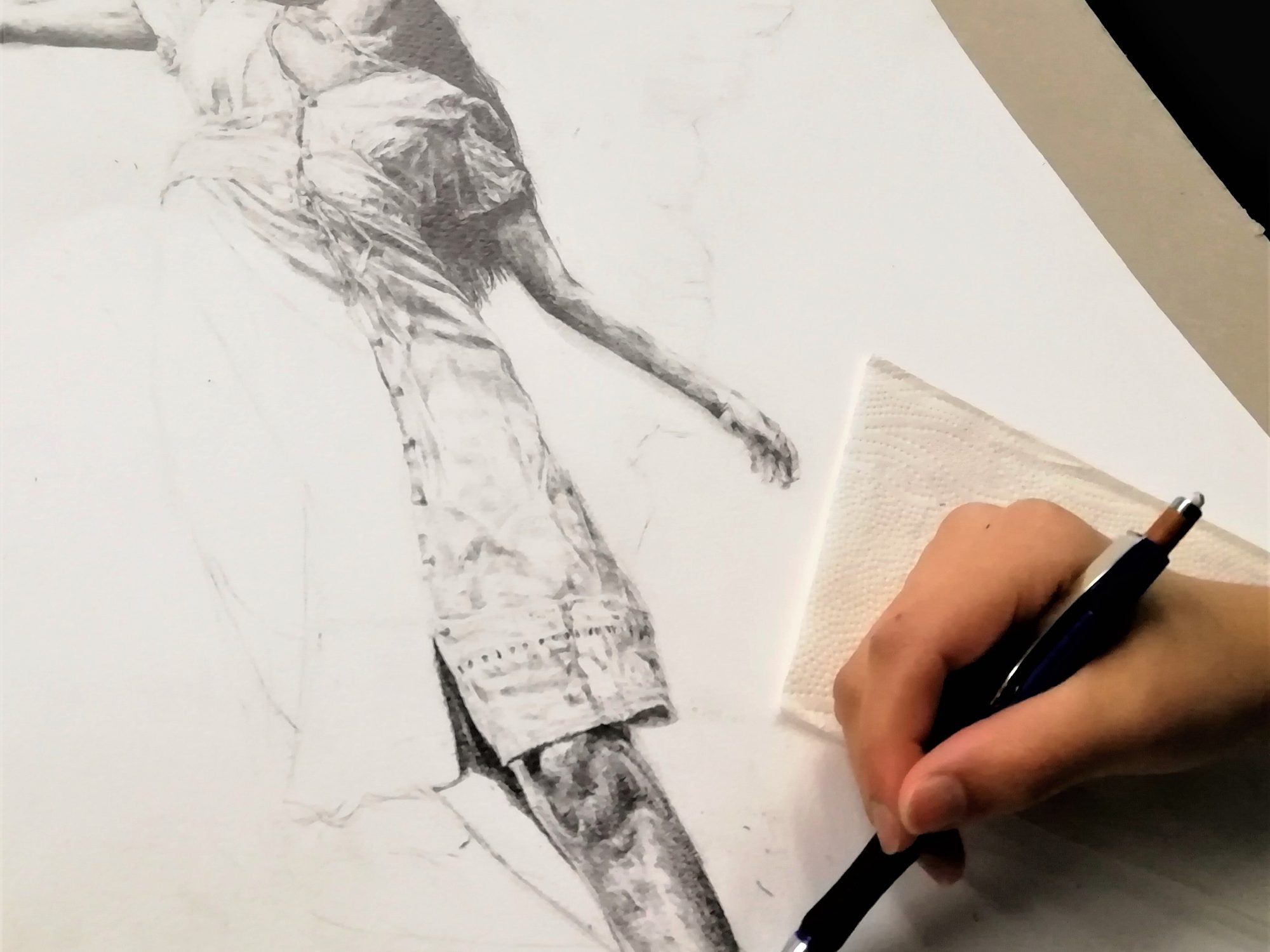 Our artists are hard at work! All are warmly invited to the “WINGS of ART” charity exhibition this coming week. The Gala Evening begins on Wednesday 15th January at 19.00. A number of ECP’s IB artists are involved as part of a Creativity, Activity, Service project. Work will be silently auctioned for Doctors Without Borders (Medecins Sans Frontier) – all proceeds from the exhibition support the organization’s missions in Yemen.

During my visit to the exhibition ‘The Wings of Art’ at Manes Exhibition Hall, I had an incredible opportunity to see the works of art from other international schools in Prague. The variety of perspectives in which IB artists have explored and presented  the theme have greatly amazed me by providing inspiration in experimentation in a variety of art areas. The artworks were presented in different shapes, sizes and forms; the most common format of presentation were the 2D drawings and photographs. There were also some unusual and unique statues and figures made by using different materials, such as colourful glass, which widens the scope of creativity – making the exhibition surprising and igniting the interest of the visitor.

The diversity of the students’ approaches was shown by the differences of the works’ style which was supported by a different understanding of the theme. For example, some of the art works reminded me more of sketches which gave them an interesting and maybe even slightly casual appearance; this added more professionalism to the exhibition by reflecting the different steps and stages of creating an art work. On the other hand, other art works were large scale and incredibly detailed; they include portraits, landscapes and many abstract art pieces which reflect the variety of colour scheme and textural experimentation. Brighter and darker tones were commonly combined together and effectively used to spread and present the artists’ message, and their understanding of the themes related to the exhibition. The themes explored and presented at the exhibition were mostly reflecting social and personal themes such as war, freedom; some were partly referenced to religion, and another popular inclusion were beautiful drawings of nature such as birds and insects.

Read what our students have to say about their individual art work below!

Annabelle – The theme WINGS inspired me to think beyond the literal meaning of the word, which for me were the wings of an angel, and consider the ideas behind the word. I was very lucky this Christmas because I was able to travel to Peru, which is how I came up with the concepts of travelling and freedom. While I was visiting Paracas, the home of pelicans and penguins, I was inspired by the birds’ freedom of travelling along the sky to any place they would like and decided that these were the perfect representation of the theme WINGS.

Shan Shan – I created the artwork with the intention of wanting the audience to see hope, have a dream and chase after it. I liked how people in the past had flying dreams, which are revealed by ancient drawings in caves, with the invention of the first plane by Wright brothers. Also, as it is dedicated to the charity Doctors Without Borders, they are like angels bringing the afflicted people hope. Flying also represents freedom. I hope people will gain freedom soon, and live the way they want.

Lam – When I was given the task to produce art with the theme of wings, the first thing I thought of was angel wings. The idea behind my piece was an individual growing or receiving wings after a selfless act. The Doctors Without Borders organisation inspired me through their actions to create a piece of art that depicts exactly what they are: angels saving those that have limited access to proper health care and at their own personal risk. It represents the attainment of a true bravery and kindness in a tangible form; wings.

Arina – The word “wings” initially sparked ideas of freedom, birds and flying. The piece was meant to convey the feeling of freedom and the carelessness that arises from taking a step away. The cities from above are meant to present a different view of the life, in the chaotic midst of which we find ourselves. The chaotic and active nature of the city was meant to be conveyed through the use of photography. The technique of layering photography with simple graphics was new to me, and I was hesitant at  first of using photography in order to supplement the graphic works. The perspective of the graphics create the sense of carelessness that comes with seeing the chaos from above, making it appear small, meaningless

Emma – I started off with the concept of hands. Hands are another useful tool we use in our day to day activity, just like birds and their wings. The painting is of two hands with intertwined fingers, as if one is pulling the other up. This is also symbolized by the red/white and blue/black background. I wanted to create a sense of chaos and darkness, while using traditionally what I guess are cheerful colors, like purple and green, and give the painting a psychedelic effect.

Melanie – The main inspiration for my piece was wanting to make something different and unique to everyone else. I got inspired by mosaic glasses and by brooches. I decided to break glasses into little pieces and use them as a part of the wings. It was difficult for me, because I was working with these kinds of materials for the first time, and had no experience with metal wires or glass. I am proud of myself that I managed to create a nice piece of art work, and overcame the struggles I had creating it

Vanessa – This is a painting of a person that is going through something in life and doesn’t know how to deal with it anymore. She is sitting in water, with darkness around her. Then her Guardian Angel sees how she’s hurting and decides to help her get her way up again. The wings on her back represent the help from her angel, it gave her wings to gain bravery, energy, helped her stand up and not give up anymore. In real life, our Guardian Angel may be someone close, family, friends that we trust, those people will always help you from misery. No matter what.

19.00 / Opening ceremony moderated by Karel Voříšek, with toast and introduction of the evening program
19.30 / Presentation of Doctors Without Borders Missions by Dr. Tomáš Šebek
20.00 / Guided tour of the exhibition
20.30 / Musical performance by Marta Kloučková
21.00 / Charity Raffle
22.00 / Silent auction winners and announcement of the grand total raised